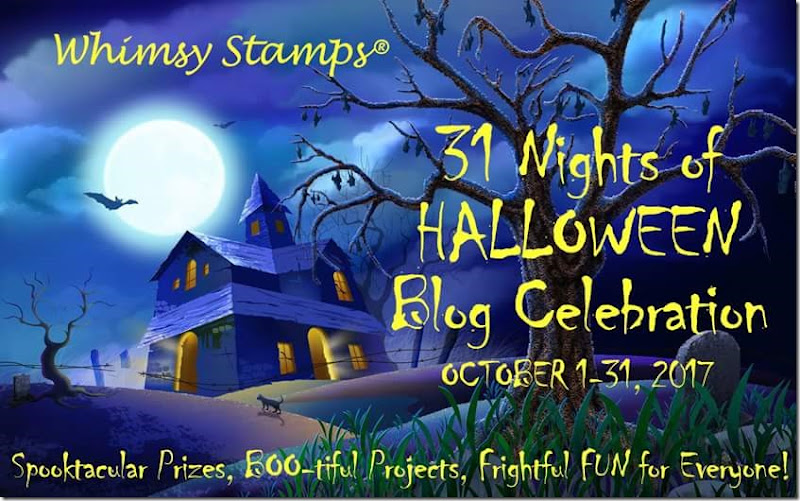 It’s been a month of Halloween fun over on the Whimsy Stamps blog.
I decided not to make a card as I don’t celebrate Halloween, but my grandkids do.  So after scouring Pinterest I decided to make up a simple little bag to pop some sweeties in.  I used the Sleepy Hollow Stamp set and matching Sleepy Hollow Die set, along with the fab Haunted Halloween Digital Papers to make my little gift bag. 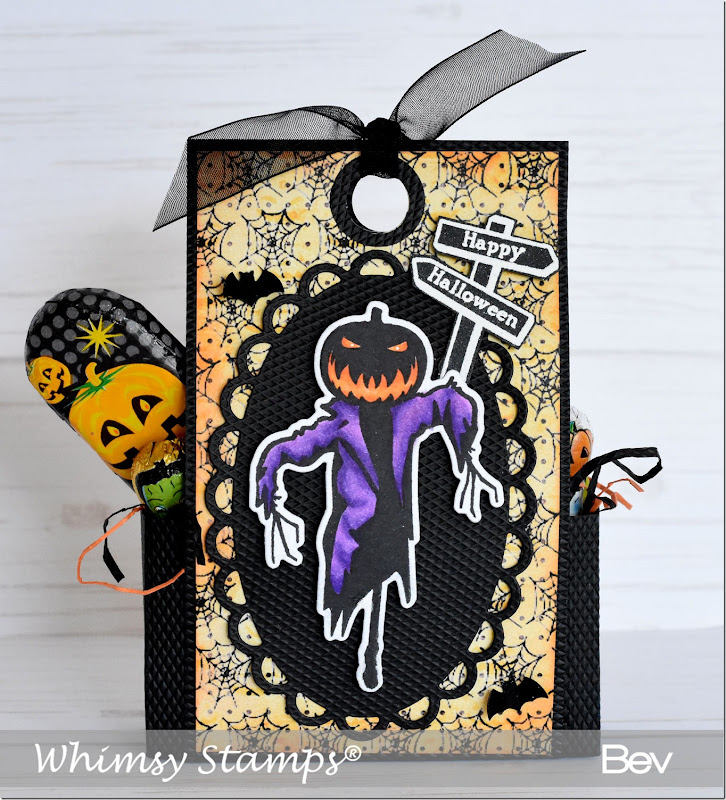 The scarecrow is so easy to colour! 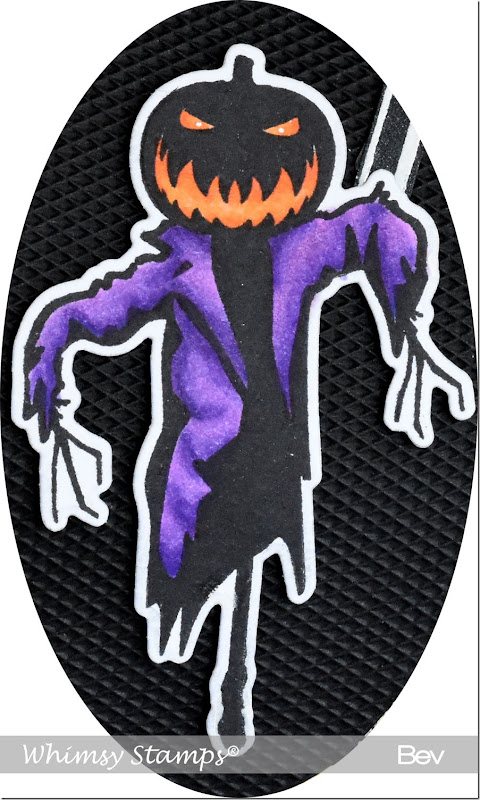 My granddaughter saw this and came along the next day to make some little gift bags for her friends.  Winner winner chicken dinner, I got to spend some crafty time with my precious girl and she got some halloween goodies sorted.  I love that child so hard 💖 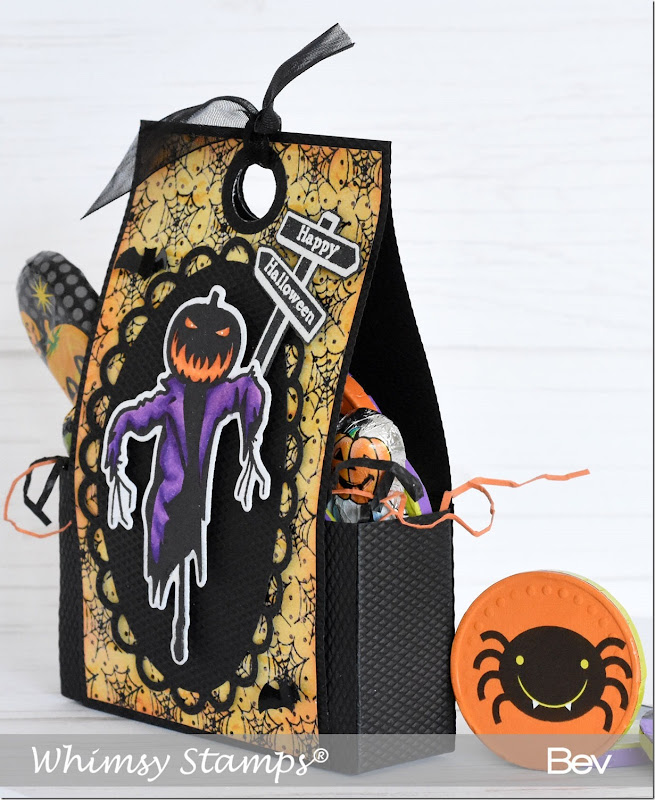 I think I’m going to make some of these up for Christmas to pop my homemade fudge and caramelised pecans in.

Hope you check out the Whimsy blog, there's been some amazing inspiration and give-aways this month.
Posted by Bev at 08:15 7 comments:

Hello everyone, I'm back with another shabby chic card, using the beautiful lilac paper from the UKH Gallery Provence pad. 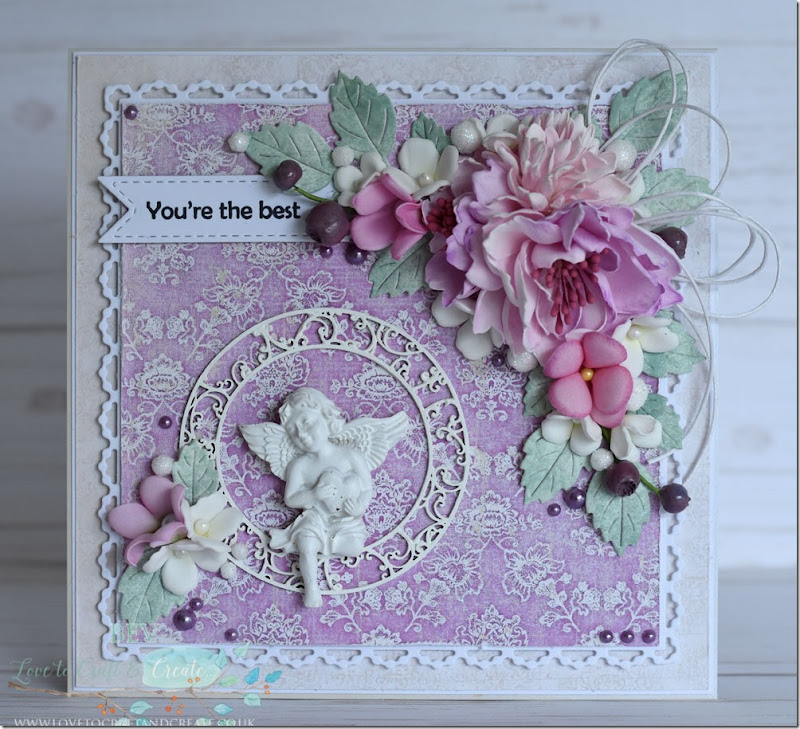 I made some foamiran flowers and little blueberries.  The large flowers are made from the Whimsy Stamps Peony Flower Die set, the little white flowers are from  Joycrafts 6002/0068 ~ Square Flower dies and the others are made from Craft Passion dies (links below)I didn’t have a green card that matched the paper for the leaves, so I roughly painted some card with diluted green acrylic paint, dried then die cut.  Job done 😊 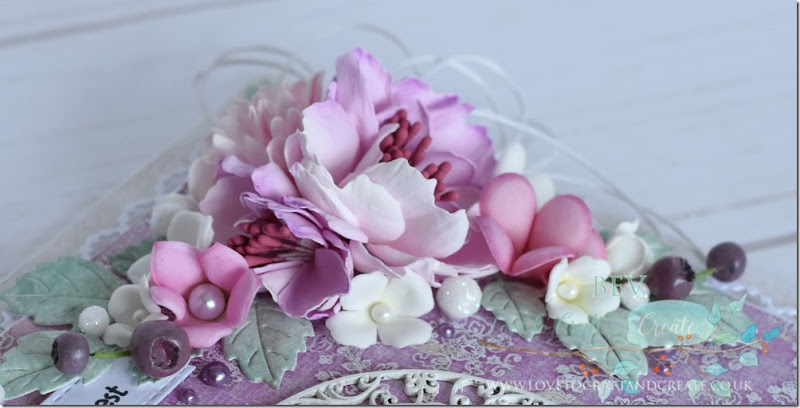 I bought the resin angel from a lady on Facebook a while back. 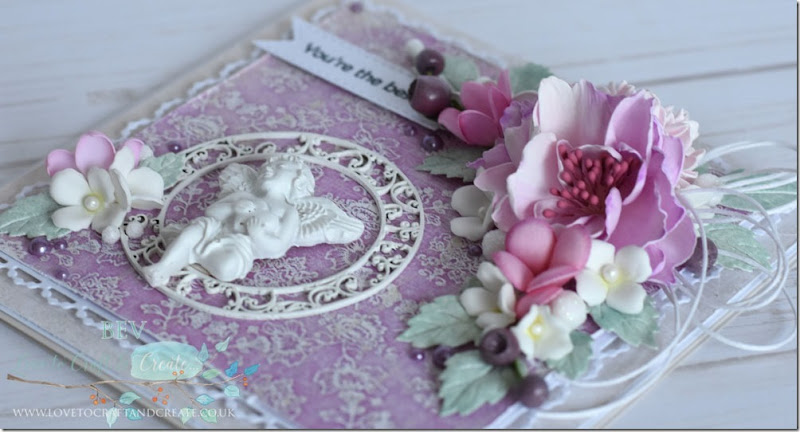 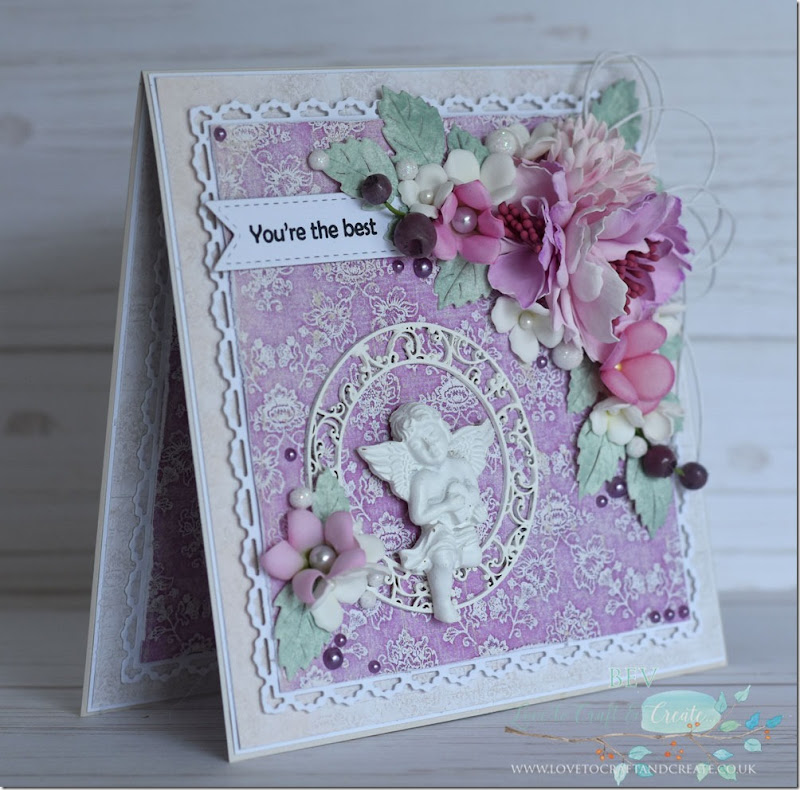 I went to the foamiran workshop organised by Monika from Love to Craft and Create and taught by Ewa Constancja last weekend.  It. Was. Fantastic!  It truly was.

We made Poinsettias from dies (Tim Holtz and Craft Passions), learned how to make those sweet little berries, and made mistletoe and holly sans dies - these were all hand cut.

Here's some of my efforts, and if this is what I can make whilst poorly with a cold and the (unknown) start of shingles I can't wait to get well and be let loose in my craft room again. 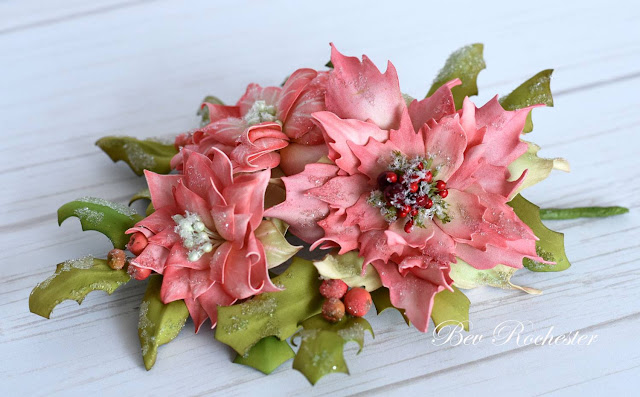 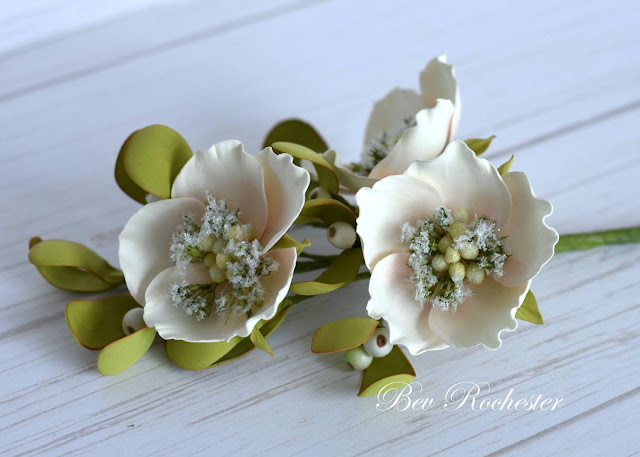 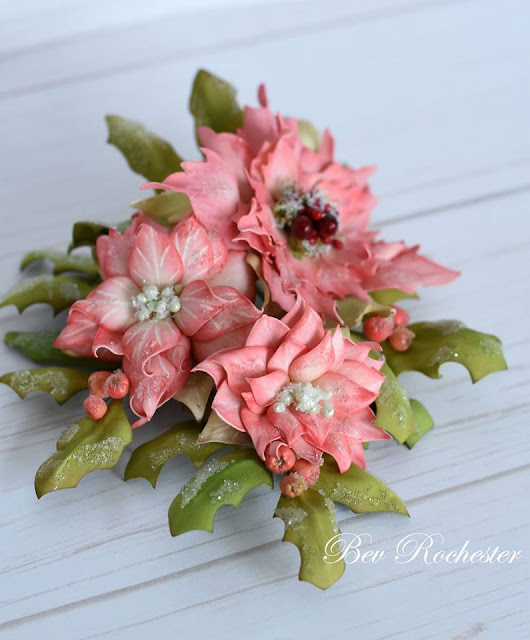 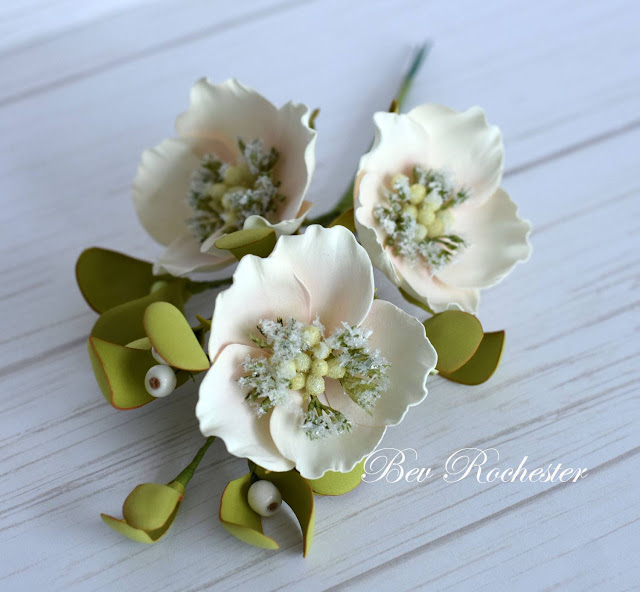 Back on Sunday with a new card.

I love Kraft, red and white together, it gives such a lovely country look to the card.  I’ve used the beautiful Snow Flurry set and Holiday Word Die set from the latest Whimsy Stamps release and kept it simple with some heat embossing, gingham ribbon and enamel dots, finished off with a couple of bells. 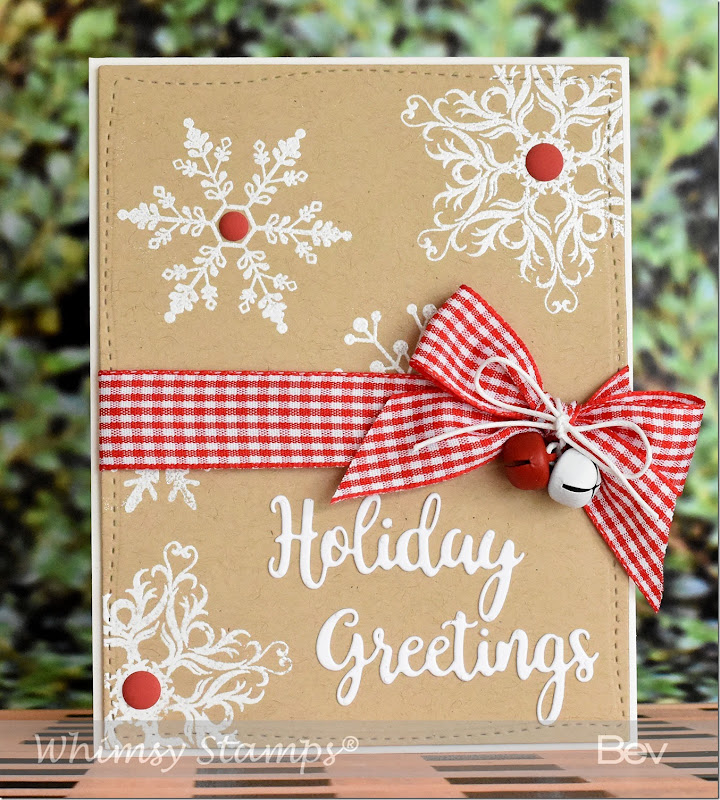 I cut the word dies 3 times and glued them together so they would stand a bit proud of the card. 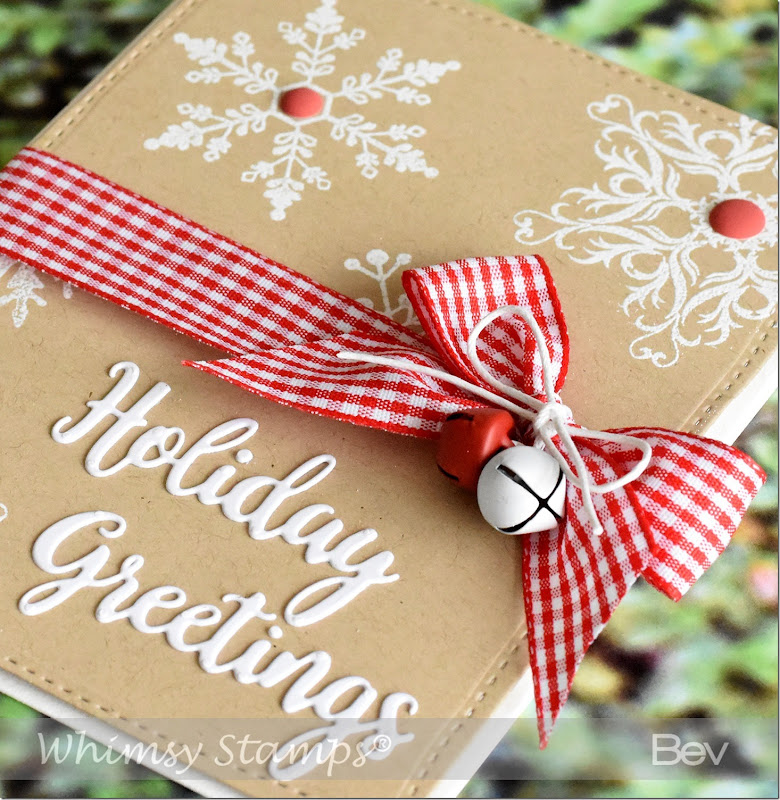 And job done, I’ve made a whole batch of these – my 2017 Christmas card pile is coming along nicely!

Welp, after all these years I can at last say I've made an album.  I was sent it as part of my GDT kit from Love to Craft and Create so, although an album is normally something I would totally shy away from I gave it a whirl and .... it's a lot easier than I thought it would be.  Working with a paper pad and a set of chipboard embellishments helped it ll come together so easily,

The cover of the album is a white fabric and I didn't want to cover it with paper so used a stencil and come embossing paste to add texture, then decorated with some flowers, die cuts and embellishments that I made using moulds and a hot glue gun. 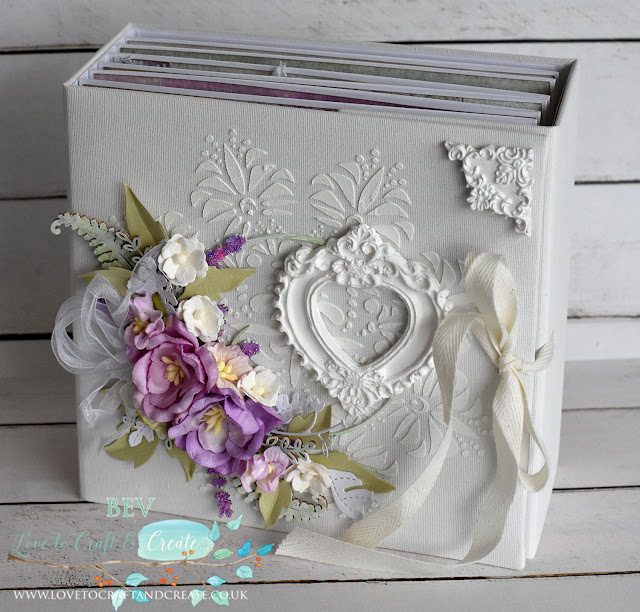 There are lots of pages, so I've had to squeeze as many as I can into one photo else this post would've gone on for ever lol. 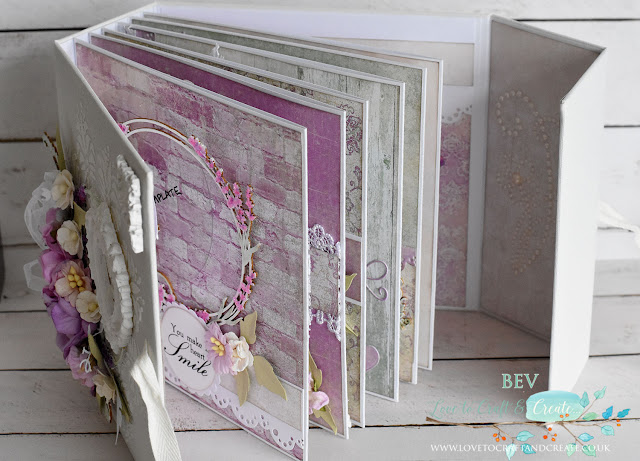 I made some acetate templates to make cutting and fitting photos behind the chipboard frames ... as you can see in the photo, the template slipped and I didn't have time to rephotograph it.

I made pockets to slip tags in, dug out some older stamps for sentiments, used digi sentiments, pulled out a whole load of dies and had a good old play!

I used some micro-beads to decorate the chipboard lavender pieces after painting to give extra texture. 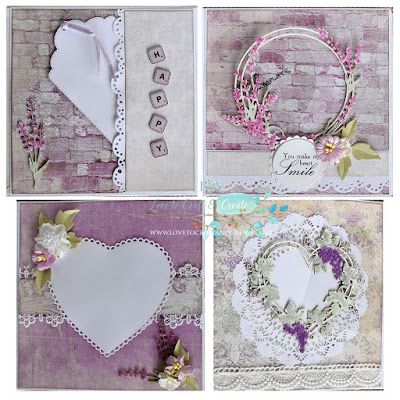 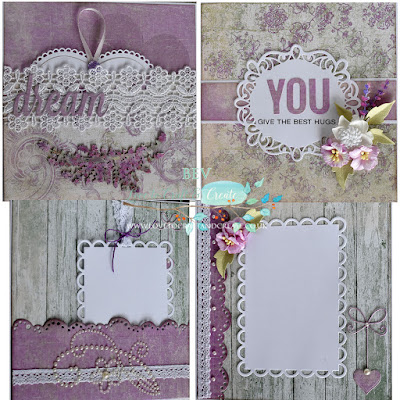 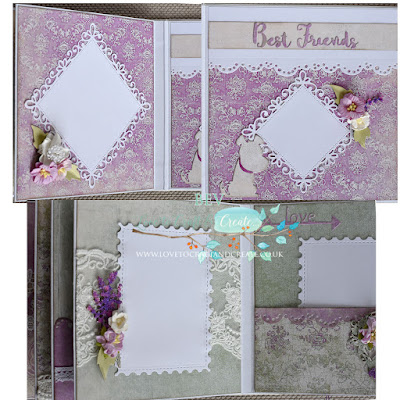 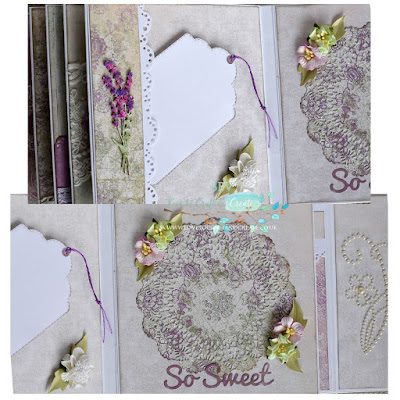 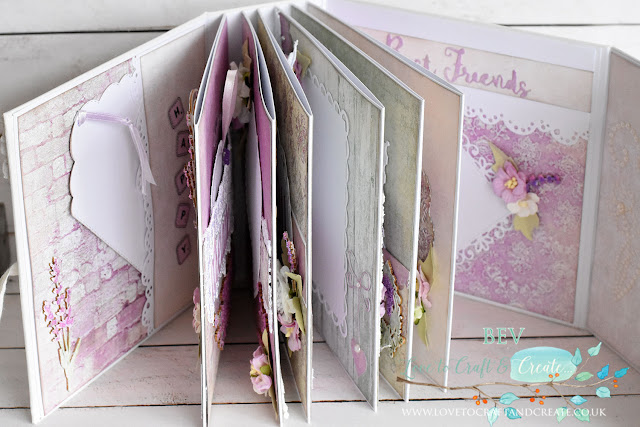 The album also has a box that is made to fit the album - but Bev here went for the overkill on the embellishments so I can't push the lid down properly.  Only I could do that 😂 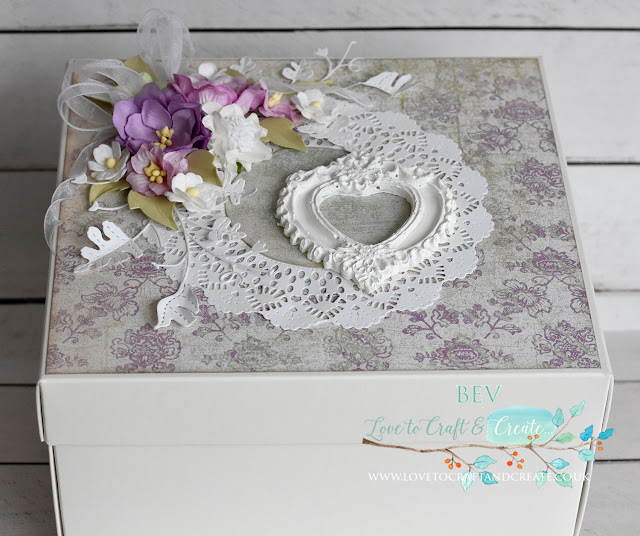 And now for the links

I’m back with another preview for the October Whimsy Stamps release of clear and rubber stamps as well as dies.  The new release will be live in the Whimsy Store on the 7th, until then the DT are showcasing the new goodies. 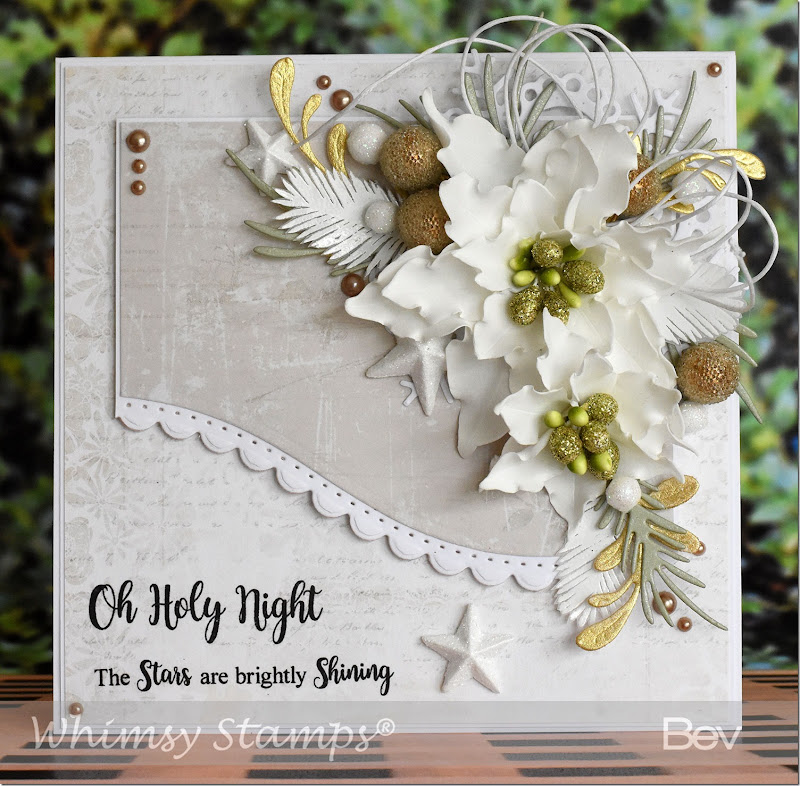 I made the poinsettias in two sizes, the centres being just a simple cluster of berries and stamped some of the branches from the stamp set onto vellum and heat embossed then fussy cut them out to use in the flower arrangement. 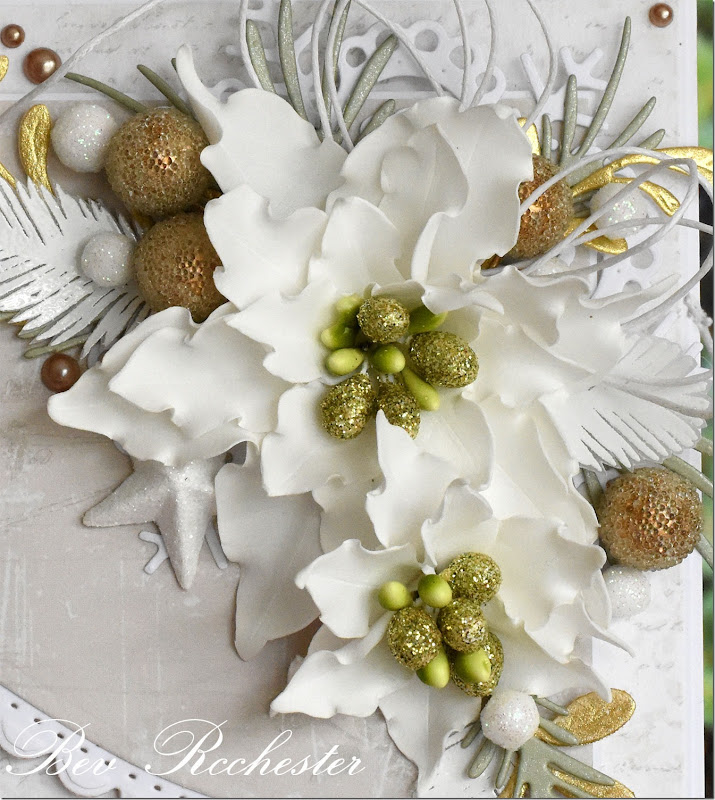 I made the little stars (which I thought worked so well with the sentiment) from hot glue and a silicone mould.  Once set I gave them a coat of white paint and slathered in glitter. 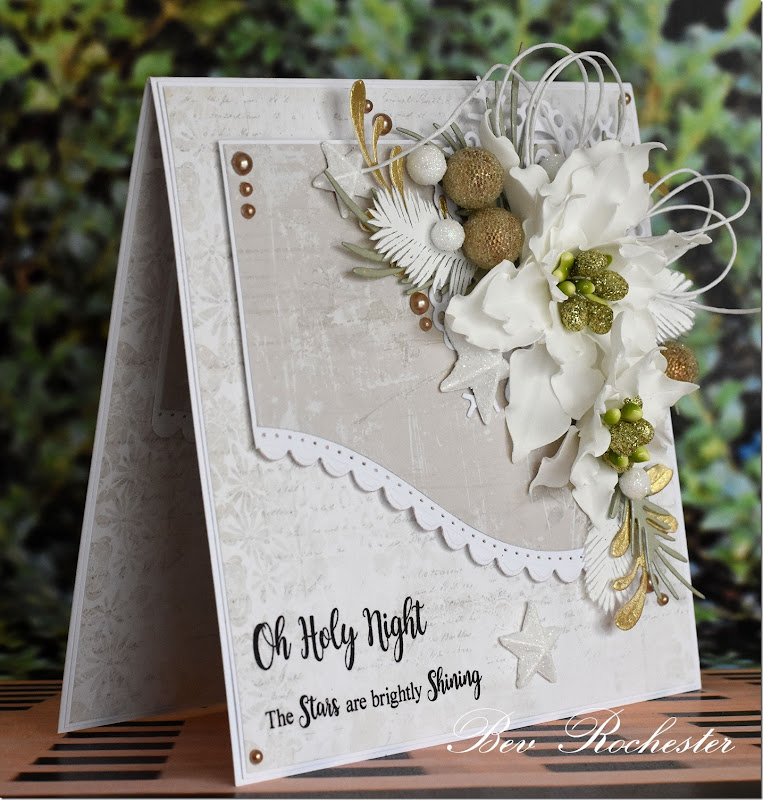 Whimsy Stamps products used:  (stamp set will be linked once live in the store on the 7th)

It's time for the new October release at Whimsy Stamps. Each month from the 1st through the 5th, a few new sets from both the rubber and clear stamp lines along with new dies. Then on the 7th, everything will be available to purchase in the Whimsy Stamps store.

For my card today I’ve used the sublime new Snow Flurries Background stamp along with the new Greetings Dies, as well as the Lily Flower die (my old faithful and perfect for poinsettias!) and the Christmas Branches die set that was released last month.  I used the Hand Stitched Nested Rectangles dies for the card base.  The links to the background stamp and the word dies will not be live till the 7th, so I’ll link to those once they are.

I made the background by stamping with versamark ink then heat embossing with white EP.  I then rubbed on Pumice Stone Distress Ink all over.  Quick, simple and great for production line cards. 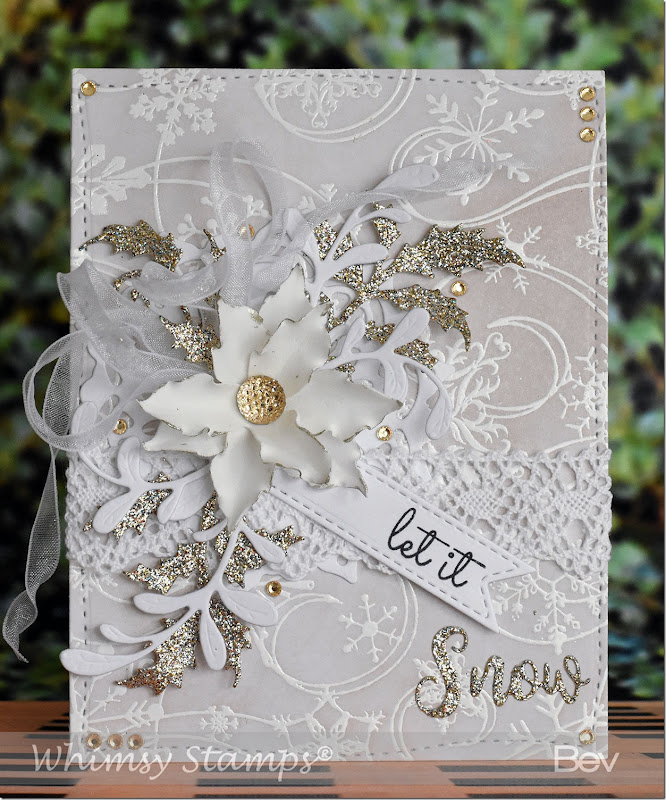 I used white foamiran to make the poinsettia and tipped the edges of the petals with some gold paint.  Love the sparkle the glitter holly leaves give off. 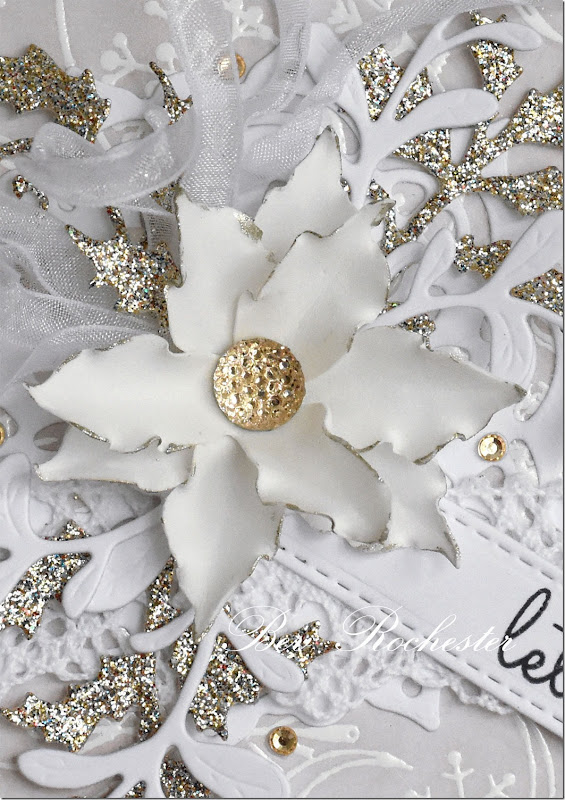 A little stitched banner was perfect for the “let it” part of the sentiment. 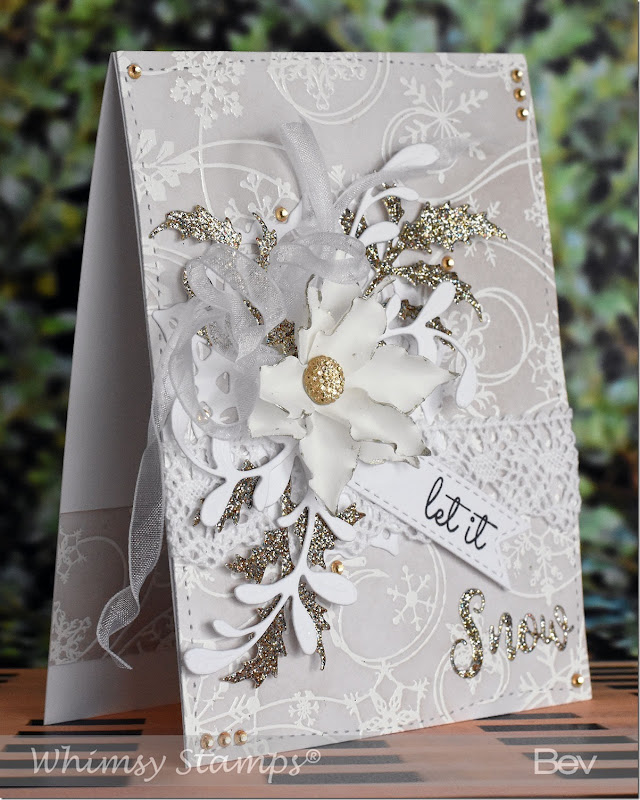 Back tomorrow and Wednesday with more goodies
Posted by Bev at 07:00 11 comments: