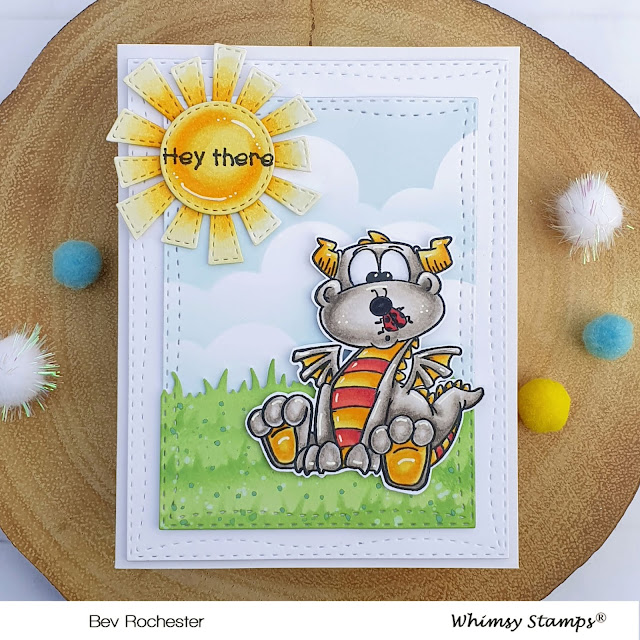 I created a little scene for him by inking up a panel of Bristol Smooth - I use the cheaper Canson Bristol Smooth pads at £6 for 20 sheets and keep the Strathmore for colouring.  The Canson works a charm for ink blending!

I then inked up a piece in Cracked Pistachio and Mowed Lawn then die cut it using the Build a Fairy Garden Die Set, then die cut a scrap of card and used that as a stencil to ink in some grass for texture.  This was then die cut using the Wonky Stitched Rectangles Die Set and added a die cut sun from the Up in the Clouds Die Set that I coloured with copic markers. 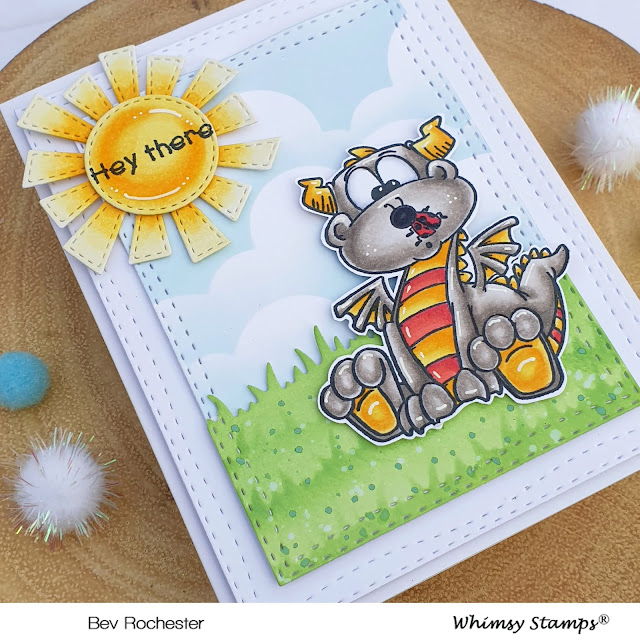 After I had photographed this card I realised it's almost a carbon copy of this one I did a while back, and that doesn't really surprise me.  My hubby has been so very poorly again that I don't know whether I am coming or going.  He was admitted to hospital again yesterday after an 11 hour wait in casualty, not fun in the middle of a pandemic.  It's reached the point that something had to give so I've had to make some choices and, as much as I didn't want to, I have had to stand down from the Whimsy design team.  This past year has taken a huge toll on us both and so although I will still make some me time in my craft room, my posts will be shorter and more sporadic.  I do have a whole folder of cards sat there waiting to be posted so there will still be posts up on my blog, just not DT stuff. 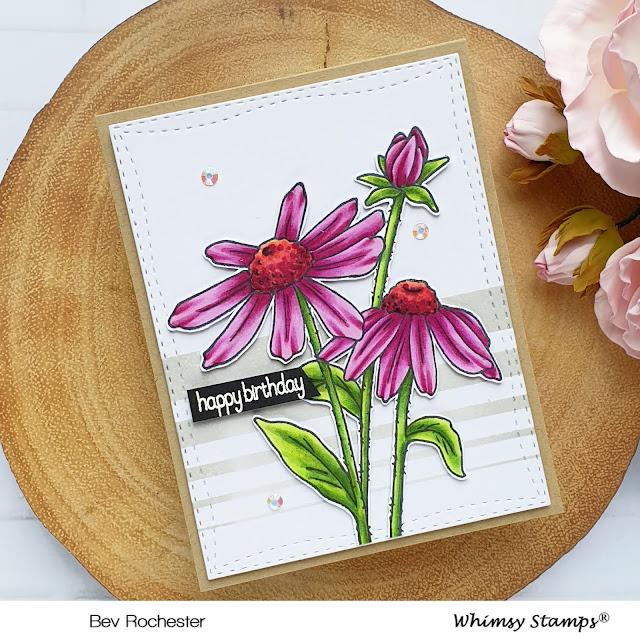 I  stamped some stripes with smoky grey ink with the Get In Line Clear Stamp set, but kept the stamps on the acetate panel so I wouldn't get wonky lines when stamping.  I die cut the panel using the Wonky Stitched Rectangles Die Set and adhered this to a kraft card base.

I stamped and coloured the image then fussy cut and adhered to the card front with foam tape, and finished off with a sentiment from the Everyday Mini Sentiments Clear Stamp set. 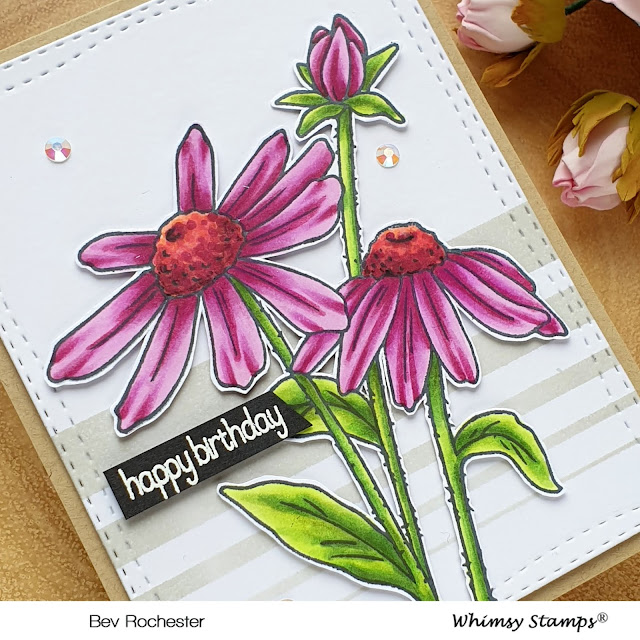 Get In Line Clear Stamp set 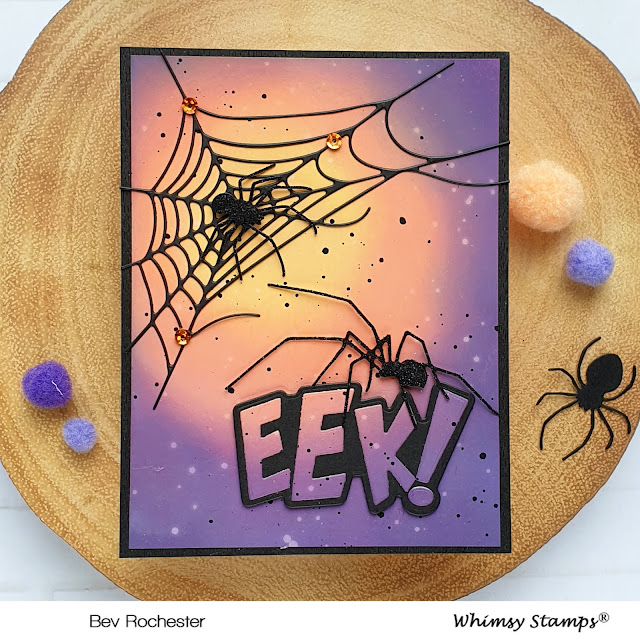 This is definitely an Eek card, those spiders!! 😱

This is my second Halloween card for the newest Whimsy Stamps release and I kept it really simple with ink blending and die cutting.

I inked a panel of Bristol Smooth cardstock with Squeezed Lemonade, Carved Pumpkin, Wilted Violet and a touch of Chipped Sapphire distress oxides, felt the yellow was too garish so went over that with some Scattered Straw to soften it a bit.  I then splattered the inked panel with water and a fine mist of black watercolour.  Once dry, I die cut the Eek Word and Shadow Die - once from the inked panel and a shadow from black cardstock.

I die cut a web and some spiders from the Spiders and Webs Die Set and job done!  Another really quick and simple Halloween card done. 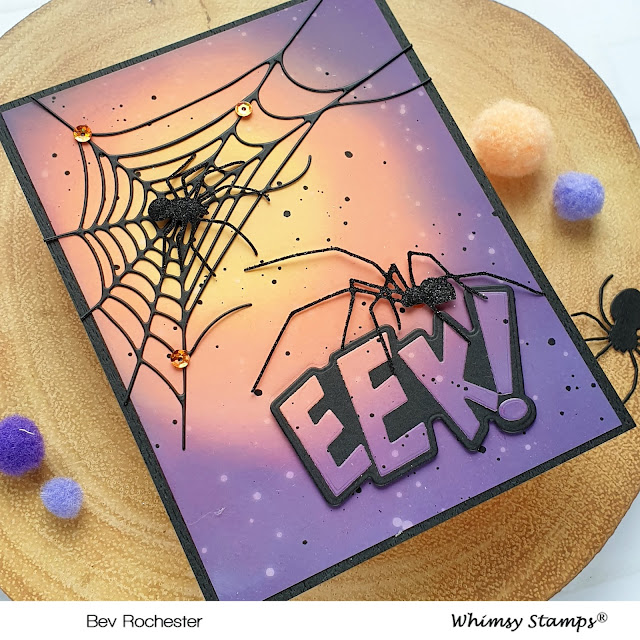 Whiimsy Stamps Hourglass Slimline Die and the cutest Ghosties ever 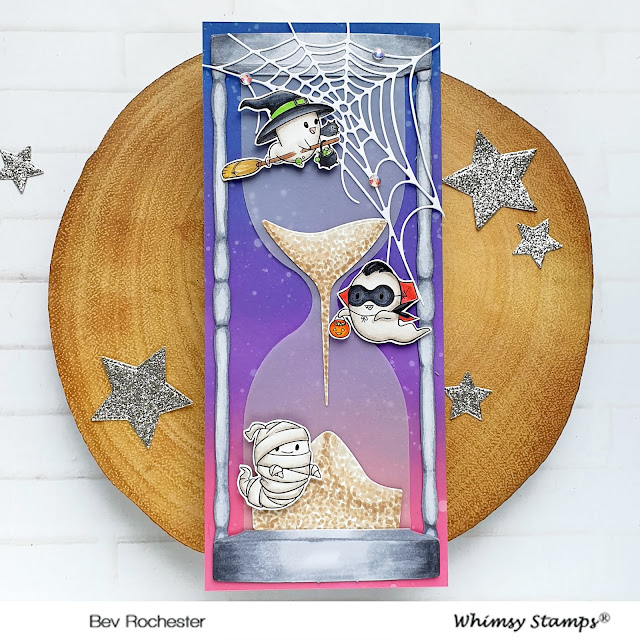 Day 2 of the new release and  Whimsy Stamps sure have come up with a unique Slimline Hourglass Die,  which I have paired with the fabulous Spiders and Webs die set and the oh so cute Halloween Ghost Gang digital set.  I was able to size down those sweet ghosties to fit on to the front of the card perfectly.  I used Word to do this then printed them off and coloured them with copic markers.

I inked up a background using Picked Raspberry, Wilted Violet and Chipped Sapphire Distress Oxides then die cut the hourglass die.  I used vellum for the glass part, and coloured in the sand and stand with copic markers.

For a girl that doesn't get Halloween I sure love the cuteness of these ghosties.  That Vampire!!! 💗 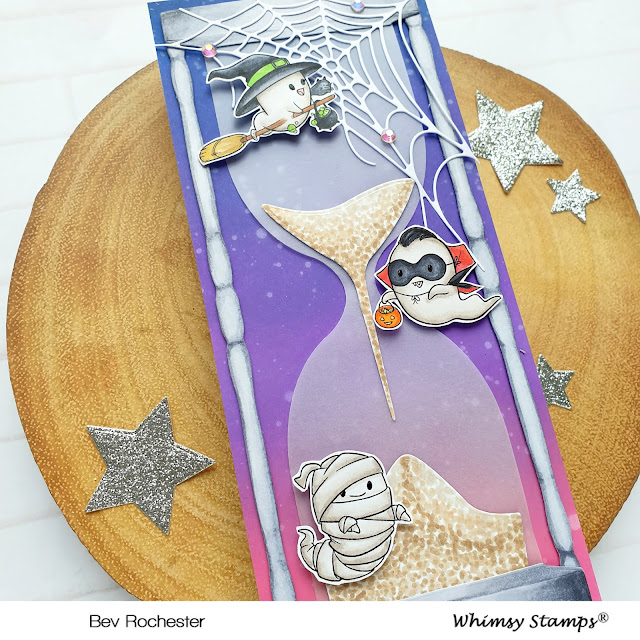 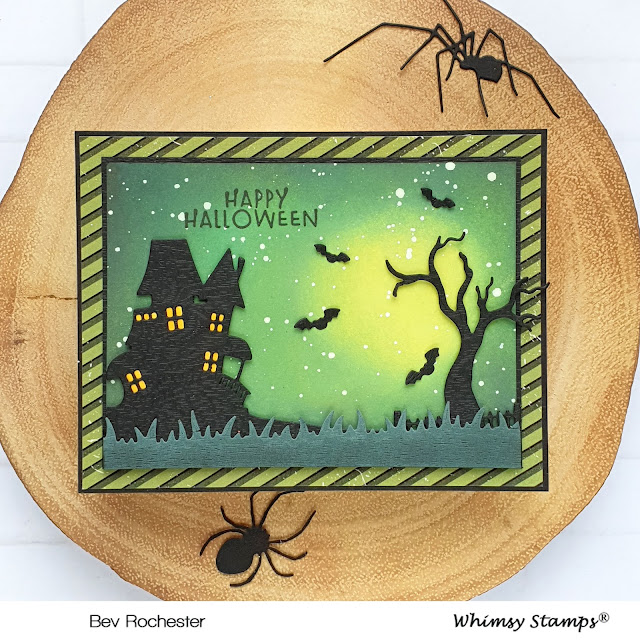 Today sees the first of 4 Halloween releases from Whimsy Stamps although there are non-Halloween goodies dotted throughout to keep this old girl sane haha.

I've used the new slimline Haunted Graveyard Border Die for this card, though I chopped off both ends so it would fit on a standard A2 card.  I inked a panel of Bristol Smooth cardstock with Distress Oxides - Squeezed Lemonade, Mowed Lawn, Lucky Clover and a touch of Chipped Sapphire.  Once it was dry I splattered on some white copic ink for a starry effect.

I stamped on the Happy Halloween sentiment from the Gnome Witch Rubber Stamp then matted the panel on to black card and then on to a piece of patterned paper from the Vintage Halloween 6 x 6 Paper Pack.

I die cut the Haunted Graveyard Border Die from textured black cardstock, popped some yellow card behind the windows and adhered this to the front of the card and finished off with some bats from the border die.  The card looked like it was missing something so I die cut a black grassy border using the Build a Fairy Garden Die Set and then inked this with Mowed Lawn and Chipped Sapphire Oxide ink.

I have another three cards to go up this week, hopefully I will be able to stay back in the swing of things and not go missing for another month.  My hubby had yet more surgery last month and yeah, things haven't been very good in my world again.  But he's home and on the mend .... again ... and I'm so grateful that we had the option to have the surgery done privately rather than wait for the NHS to get caught up, if they ever do. 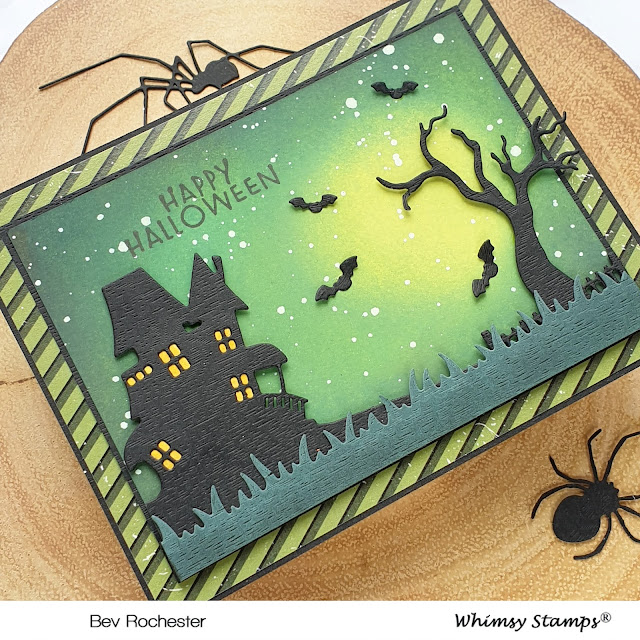 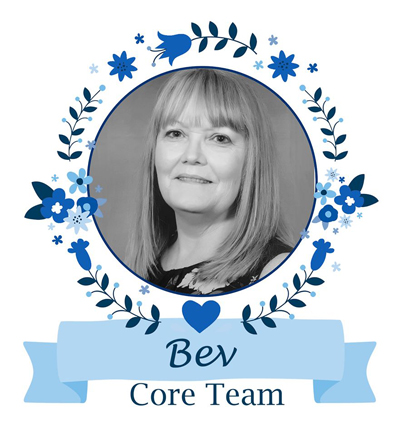